East Pierce Fire & Rescue Chief Dan Packer died July 26, 2008 in a wildfire in northern California. The 49-year-old chief had just begun a two-week assignment as a division supervisor overseeing wildland firefighters in the Klamath National Forest when the blaze suddenly blew up during a routine survey of the area.

His loss has left a great hole in our hearts. To us, he was a respected chief, a valued teacher, a mentor and a friend. He was also a firefighter who loved his job. 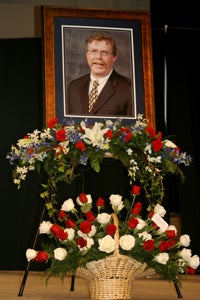 Chief Packer taught us that we shouldn’t expect the respect of the community just because we are the fire department. We have to earn it every day through hard work and a concentrated effort to provide excellent customer service.

Since 2000, when the East Pierce fire district was formed, the words “Where Compassion and Action Meet” have been emblazoned on all the fire engines, medic units and support vehicles. For Chief Packer, it wasn’t just a motto, it was an expectation.

To help put it into daily practice, he encouraged us to share examples of service at our monthly employee meetings. We heard about the time crews responded to a diabetic patient who was having difficulty with his sugar levels. The firefighters cooked the man breakfast to make sure he had a good meal. Another time firefighters helped repair the front door of a disabled man whose home had been burglarized. With every example, he led the rest of us in a rousing “Ooo, way to go!”

As a leader, people were drawn to Chief Packer. They trusted his judgment and tried to emulate him. He had a great sense of humor and never took himself too seriously.

One of the reasons he was at the California wildfire that claimed his life was to gain experience that would help in our community’s emergency preparedness plans. As a member of an Incident Management Team, Chief Packer was providing management support on a major wildfire. He and other senior staff members at East Pierce participate on these teams not only to help others, but just as importantly, to bring back valuable experience in case of a large-scale disaster in our district, such as an earthquake or lahar.

Chief Packer was extremely proud of East Pierce Fire and Rescue. We are grateful that he provided us with a strong sense of mission. It has helped us move forward despite our grief.

Today, we renew our commitment to serve you, the citizens of our district, with distinction and honor. We know Chief Packer would be proud.